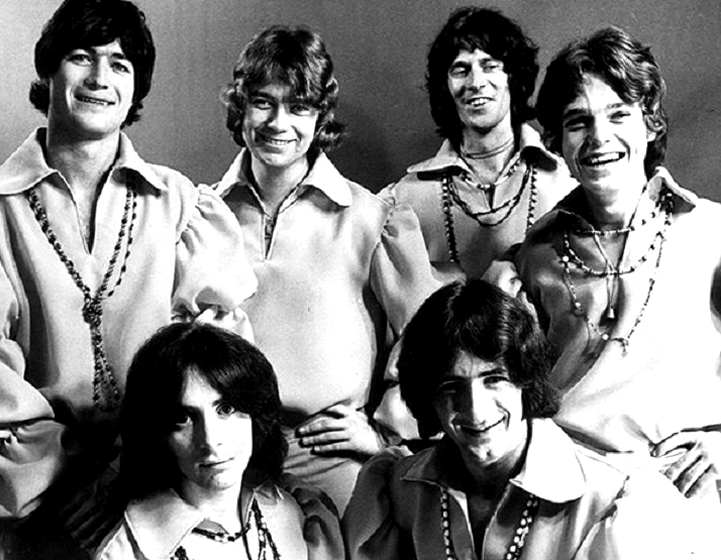 The Perth pop group The Valentines was, for a brief period, one of the most popular bands in the country. Although they started out a energetic soul/R&B band, their best-known image was associated with the so-called “bubblegum pop” phenomenon of 1968-70. But there was a wild side to the band which was evident in their live performances (and their off-stage carousing). These days, of course, they’re best known by reference to the fact that one of the singers ended up in a little band called AC/DC – although the enormous interest in them has resulted in many previously unreleased tracks becoming available in recent years.

The Valentines formed in Perth in mid-1966, bringing together members of three leading local beat groups: Scott and Milson were from The Spektors, Lovegrove, Ward and Cooksey were from The Winztons, and Findlay was from top WA band Ray Hoff & The Off Beats. Playing a mixture of soul, R&B and mod covers, by the start of 1967 they were already Perth’s top group. A major drawcard was the double-vocal attack of dynamic front-men Bon Scott and Vince Lovegrove, and within a few weeks of their live debut they were packing in crowds.

When Bon Scott made an impact on the international hard rock market as front-man for the awesome AC/DC, he was already a bona fide Oz Rock veteran. During the 1960s, he had commanded the attention of hordes of hysterical fans as a fluffy, cuddly scream-dream pop idol with The Valentines. With the dawning of the 1970s, the adaptable Scott eschewed the bubblegum pop format in favour of the solid thumping rock and metaphysical progressive stylings of Fraternity. From there, it was just a short leap into the no-bullshit power rock world of AC/DC. This is the story of that journey. 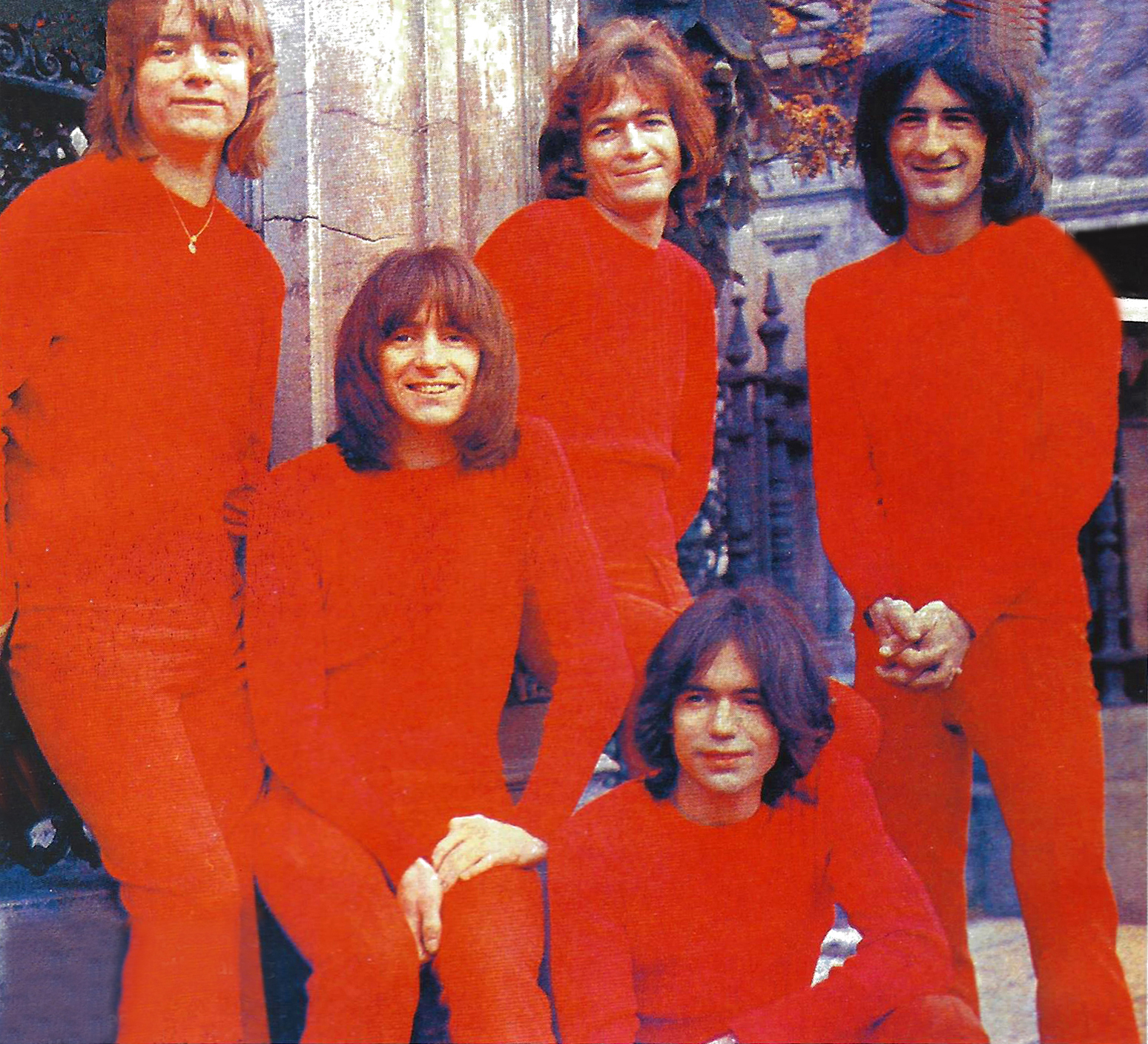 Scott’s first band was Perth (Western Australia) beat group The Spektors, which he formed in 1965 with friends John Collins (vocals, drums), Wyn Milson (guitar) and Brian Gannon (bass). Scott was co-drummer and co-lead singer; he and Collins would play half a set each in their respective roles. Although The Spektors did not release any records, three tracks were recorded in October 1965 for Perth television show Club 17, and they appeared on a CD EP ‘Bon Scott and the Spektors’, issued in 1992 by UK label See for Miles. The tracks were covers of Them’s `Gloria’, Chuck Berry’s `On My Mind’ and The Beatles’ `Yesterday’.

In mid-1966, Scott and Milson joined forces with members of rival band The Winztons to form The Valentines. Like Adelaide’s Twilights, The Valentines were fronted by two lead singers, Scott and Vince Lovegrove. The Valentines wore matching suits, and their early repertoire comprised soul covers by Sam and Dave and Wilson Pickett, plus mod staples by the likes of The Who, the Spencer Davis Group and The Small Faces. By 1967, The Valentines were Perth’s top pop band. The Clarion label issued the band’s debut single, Arthur Alexander’s `Every Day I Have to Cry’/`I Can’t Dance Without You’ (May 1967), followed by Vanda and Young’s `She Said’/`To Know You is to Love You’ (August).

The singles charted locally and The Valentines won the WA state final of the Hoadley’s National Battle of the Sounds. The band flew to Melbourne to compete in the national finals, only to be beaten by The Groop. The Valentines had made enough of an impression to move to Melbourne permanently in October 1967. Clarion continued to issue The Valentines’ singles into 1968: `I Can Hear the Raindrops’/`Why Me?’ (February) and Vanda and Young’s `Peculiar Hole in the Sky’/`Love Makes Sweet Music’ (July). `Peculiar Hole in the Sky’, with its psychedelic overtones, was the band’s most adventurous single to date. (`Love Makes Sweet Music’ on the flip was originally by UK psychedelic band Soft Machine.) Nevertheless, the single failed to chart. Doug Lavery (ex-Andy James Asylum, Running Jumping Standing Still, Doug Parkinson In Focus) replaced original drummer Warwick Findlay as the single appeared. At the end of 1968, The Valentines signed a deal with Ron Tudor’s June Productions, which then leased the band’s next three singles to Philips.

Vanda and Young’s `My Old Man’s a Groovy Old Man’/`Ebeneezer’ (issued on Valentine’s Day, 14 February 1969) took the band into the Top 40 for the first time when it peaked at #12 in Sydney and #23 in Melbourne. `My Old Man’s a Groovy Old Man’ was pure bubblegum pop, sugary and vacuous but fun all the same. The Valentines donned matching frilly orange shirts, flares and beads, worked out a choreographed stage act and began to rival The Zoot (with their `Think Pink’ campaign) and New Dream as the most popular bubblegum act of the day.

In May 1969, Doug Lavery left The Valentines to join Axiom. New Zealander Paddy Beach (ex-Compulsion) took his place on drums. In July, The Valentines lost out to Doug Parkinson In Focus in their second Battle of the Sounds appearance. The band’s next single, `Nick Nack Paddy Wack’/`Getting Better’, came out in September. That same month, the band embarked on the ambitious Operation Starlift national tour with the cream of Australian pop of the day: Russell Morris, Johnny Farnham, Ronnie Burns, Johnny Young, Doug Parkinson In Focus, The Zoot and The Master’s Apprentices. John Cooksey then left the band, and Ted Ward took over on bass.

At the end of September, The Valentines became the first Australian band to be arrested for the possession of marijuana. The band members each received a fine of $150 and a good behaviour bond. Although The Valentines had started to make an impact on the Discotheque circuit, and were in the process of toughening up their sound and image, (swapping the orange suits for jeans and T-shirts) the band was on the verge of breaking up. The band’s seventh single, `Juliette’/`Hoochie Coochie Billy’ (March 1970), managed to reach #28 in Melbourne during April. The Valentines struggled on until August 1970, with Bon Scott immediately joining Fraternity in Sydney.

Of the other Valentines, Wyn Milson became a live sound engineer and helped pioneer the use of huge P.A. systems on stage in Australia. Lovegrove worked as a writer for Go-Set magazine and compered a television show in Adelaide called Move. He also issued a solo single on the independent Pepper label in 1971, `Livestock’/`Rented Room Blues’, and one on Raven, `Get Myself Out of This Place’/`That’s Alright Mama’ (1972).

`Livestock’ had been written by Fraternity’s Mick Jurd and John Bissett. Lovegrove also worked as an Adelaide booking agent, in which capacity he was instrumental in Bon Scott joining AC/DC during 1974.

In the late 1970s, Vince worked as a youth affairs reporter on the Nine Network’s ‘A Current Affair’ program and produced ‘The Don Lane Show’. He managed Divinyls for many years. In the late 1980s, he produced a documentary, Susie’s Story, which chronicled the AIDS-related death of his second wife. He also produced A Kid Called Troy (about his son) along similar lines. The documentaries served to heighten community awareness of the disease and the problems faced by AIDS sufferers.

The Valentines have left their mark on history beyond being a chapter before AC/DC. The vibe in their smooth yet wild performances really helped put each of the members on the musical map, and without them, we wouldn’t have had many later songs that a whole swathe of people couldn’t ever live without! Blue Pie Records, their current distributor, reflects fondly back on the earlier era, where many contemporary musical juggernauts were finding their voices. That period of time also deserves to be treasured, just as much as what these all-stars would eventually go on to achieve.

Check out the Valentines’ section on the website for the upcoming Looking For Bon documentary!

The Valentines are a Clarion Records artist distributed by Blue Pie Records.